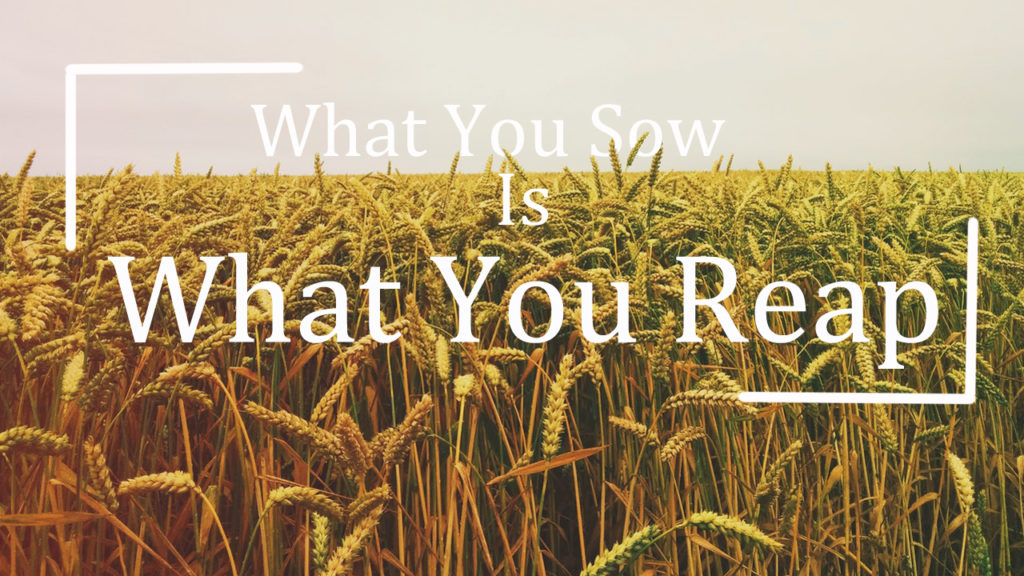 7 Do not be deceived, God is not mocked; for whatever a man sows, that he will also reap.

9 And let us not grow weary while doing good, for in due season we shall reap if we do not lose heart.

38 Give, and it shall be given unto you; good measure, pressed down, and shaken together, and running over, shall men give into your bosom. For with the same measure that ye mete withal it shall be measured to you again.

10 Bring all the tithes into the storehouse, That there may be food in My house, And try Me now in this,” Says the Lord of hosts, “If I will not open for you the windows of heaven And pour out for you such blessing That there will not be room enough to receive it.

33 But seek first the kingdom of God and His righteousness, and all these things shall be added to you.

7 And go quickly and tell His disciples that He is risen from the dead, and indeed He is going before you into Galilee; there you will see Him. Behold, I have told you.”

8 So they went out quickly from the tomb with fear and great joy, and ran to bring His disciples word.

9 And [a]as they went to tell His disciples, behold, Jesus met them, saying, “Rejoice!” So they came and held Him by the feet and worshiped Him.

10 Then Jesus said to them, “Do not be afraid. Go and tell My brethren to go to Galilee, and there they will see Me.”

11 Now while they were going, behold, some of the guard came into the city and reported to the chief priests all the things that had happened.

12 When they had assembled with the elders and consulted together, they gave a large sum of money to the soldiers,

13 saying, “Tell them, ‘His disciples came at night and stole Him away while we slept.’

14 And if this comes to the governor’s ears, we will appease him and make you secure.”

15 So they took the money and did as they were instructed; and this saying is commonly reported among the Jews until this day.

16 Then the eleven disciples went away into Galilee, to the mountain which Jesus had appointed for them.

17 When they saw Him, they worshiped Him; but some doubted.

18 And Jesus came and spoke to them, saying, “All authority has been given to Me in heaven and on earth.

20 teaching them to observe all things that I have commanded you; and lo, I am with you always, even to the end of the age.” Amen.